It’s impossible to overstate our love of both traditional and gourmet donuts here at NewEngland.com. We love the classic butter crunch donut from Kane’s Donuts in Saugus, Massachusetts, the apple cider donuts at Cold Hollow Cider Mill in Waterbury, Vermont, the warm crullers made fresh at Lou’s in Hanover, New Hampshire, and the donut cakes (take a giant donut, frost the top, and call it a cake) at Allie’s Donuts in North Kingstown, Rhode Island. We can find something fried and true in any corner of New England.

But in all of our travels, three gourmet donuts in particular have stood out as the most addictive of all. They’re all handmade with great ingredients, so they’re more expensive than those of certain ubiquitous chain. But we believe that they’re worth the occasional indulgence. 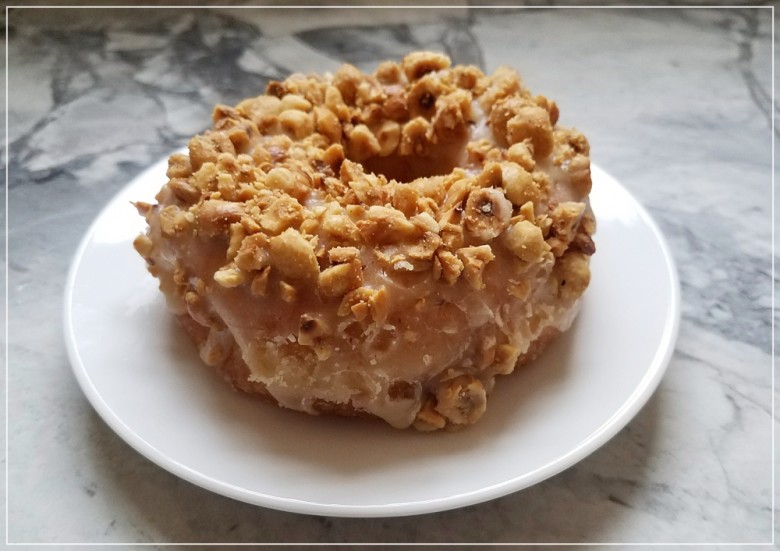 In our opinion, no one does yeasted donuts better than this small Boston-area chain, which began in Somerville’s Union Square in 2013 and has since expanded to the Boston Public Market and Brookline’s Coolidge Corner neighborhood. Starting with an enriched dough similar to a French brioche, which manages to be dense, springy, and tender in equal measure, the pastry team fries it in rounds, then drizzles it with a brown-butter glaze before rolling it in toasted hazelnuts. Other flavors–the Boston cream, the sea salted bourbon caramel, and the signature maple-bacon–are all terrific, but as one staffer whispered conspiratorially on our last visit, “This one is the BEST!” 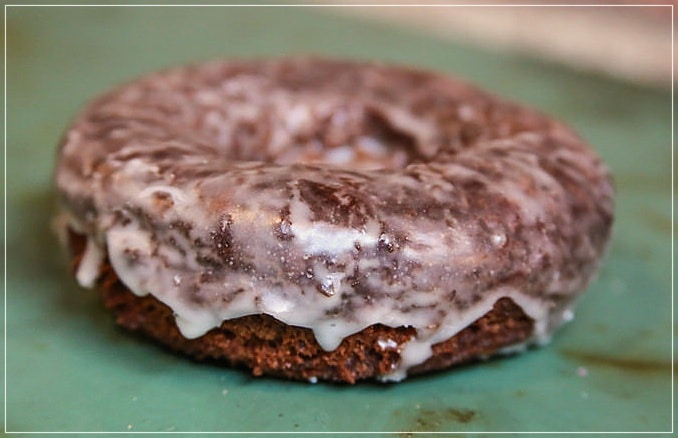 The dark chocolate sea salt donut at The Holy Donut. We’re so sold on these potato-enriched donuts, we think all cake donuts should be made with added spuds.

When Leigh Kellis got the idea that her hometown of Portland needed some exceptional donut options back in 2011, it was only natural to add Aroostook County’s finest spuds in the batter. She found that adding mashed potato to the dough made it incredibly fluffy and tender. Holy Donut took off immediately and the bakery now has two locations in Portland and a much larger location in Scarborough.

Unlike Union Square Donuts, Holy Donut specializes in cake-style donuts, and all the flavors are excellent: pomegranate, lemon, toasted coconut, that ubiquitous maple bacon, and chocolate glazed all stand out, but the chocolate glazed donut with a sprinkling of sea salt is the perfect marriage of sweet, chocolate, and just a hint of salt to make the other flavors more vivid. 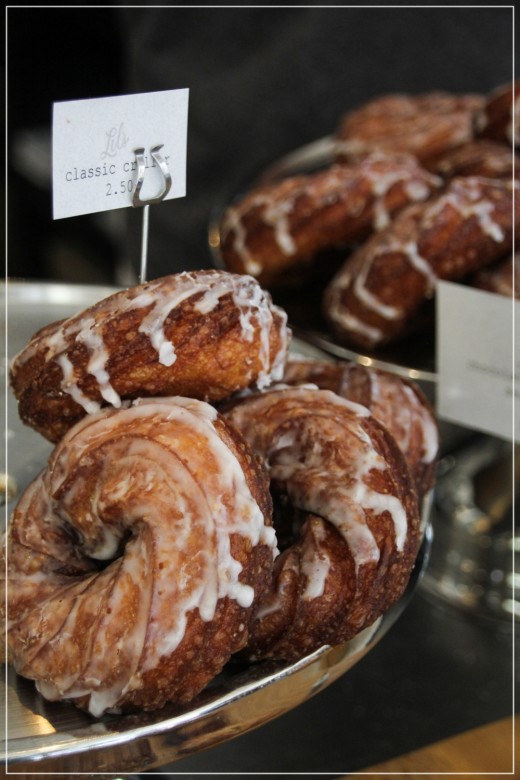 Imagine a cream puff or popover in donut form, and you have Lil’s crullers.

Lil’s is named after Lillian Mangos, a longtime cashier at sister restaurant Bob’s Clam Hut, who worked the counter with sass and style for nearly 25 years before a stroke forced her to retire from her legion of adoring fans. The year she died, when Bob’s owner Michael Landgarten was contemplating opening a bakery/cafe in nearby Kittery Point, he knew he had to name it in her honor.

And what an honor it is. The bakery, under the direction of head baker Andrew McCook, is excellent, with the star player being the stack of eggy crullers that sells out each day, but is well worth a well-timed visit. Unlike the yeasted and cake donuts described above, these are made with the kind of choux dough that you’d find in a cream puff, only fried and glazed. Manhattan may have its cronuts, but these beauties would stand up any day.

Need even more donuts in your life. We hear you. These six donut favorites were all winners in the Editors’ Choice Awards.

Mmm … maple-bacon doughnuts. If the mere thought of syrup-glazed orbs encrusted in bacon hunks has you drooling, you’ll understand why this only-in-Connecticut chain is the state’s sweetest success story. Now with four locations (and two in the works) since the original opened in Shelton in 2015, Donut Crazy has achieved doughnut domination by constantly unleashing new flavors with wow-factor taste and visual appeal—and by offering evening hours for fans who know that crème brûlée, s’mores, and cannoli doughnuts are worthy desserts. Additional locations in Stratford, New Haven, and Westport.

In 2012, Chittenden County fell in love with the doughnuts at Winooski’s Misery Loves Company, where baker Ren Weiner crafted pillowy sourdough rounds flavored with in-season fruits, veggies, and even flowers. Then, in 2014, Weiner went solo. These days you can find her sweets—glistening with local ginger glaze or plump with wild grape jelly—at locations ranging from Burlington’s Scout & Company and Onyx Tonics to the farmers’ markets in Burlington and Winooski.

Glistening honey-dipped rounds, fat jelly doughnuts sparkling with sugar, big creamy maple bars—at least four generations have stood before this glass counter and tried to decide which to bite into first. There’s bread hot from the oven, and the case is filled with cinnamon buns dripping with frosting, muffins bursting with local blueberries, and whoopie pies. Harvey’s also has a lunchroom and a solid menu (which includes a standout pork pie), but it’s the jellies we’d stand in line for.

So enormous, so artful, these doughnuts look as if they were handcrafted for a “food that’ll blow your mind” photo shoot. But they were baked in the wee hours for devoted fans waiting in a line out the door (thankfully, it moves fast). Each month’s new menu of limited-edition delights features both crumbly, cake batter–style doughnuts and brioche dough creations that are surpassingly fluffy. Local collaborations make every morsel—and sip of coffee—an only-in-RI experience.

Everyone from The New York Times to Condé Nast Traveler has waxed poetic about these sweet treats, and for excellent reason: Fresh, cheap, and available between 7 p.m. and 12:58 a.m. in-season from the rear door of Martha’s Vineyard Gourmet Café & Bakery, these doughnuts might just be the island’s worst-kept secret (as demonstrated by the nightly long lines). Raised and cake varieties are on offer, and favorite flavors include maple-bacon and butternut crunch. Conflicted about deviating from your summer frozen-dessert routine? Order the “Charlie,” a doughnut of your choice topped with chocolate or vanilla ice cream and drizzled with chocolate.

Some doughnut shops excel at coming up with fun flavors (looking at you, maple bacon and pumpkin ale). Others master one form—the cake doughnut or the yeast-raised type—but fall flat on the other. Blackbird wins because it does it all, serving up inventive flavors such as chocolate pretzel and strawberry rhubarb and pulling off all styles with panache. The Boston cream is a dream, and the classic chocolate glazed is so richly chocolaty no one can top it.

Do you have a one or two (or, like us, three) favorites when it comes to New England gourmet donuts? Let us know!

This post was first published in 2017 and has been updated.