Marcos Gershkovitch is the chef and co-owner of Angelica, but his favorite position in the gourmet restaurant isn’t in the kitchen, but behind the bar.

From there, he can see the entire restaurant, or turn around and look through the enormous, paned window into his tiny, 85-square-meter cooking area.

Back there, Gershkovitch, his head chef Jonathan Sharvit and their team of cooks — including a young assistant on police probation and Gershkovitch’s father-in-law, Daniel Tal, a retiree who pitches in one day a week — produce their classic cuts of beef and poultry, elevated with elegant, fresh sauces and accents referencing Mediterranean produce and the restaurant’s Italian and Asian influences. 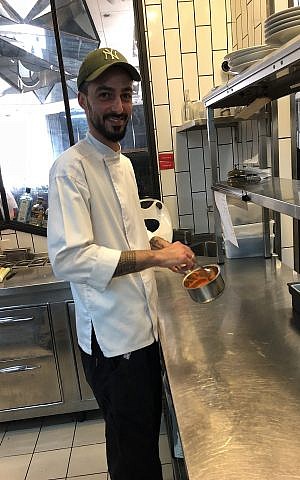 Jonathan Sharvit, the new head chef at Angelica, is also new to cooking kosher, after years of chef work in Italy (Jessica Steinberg/Times of Israel)

The restaurant alters its menu every four months, but “there’s not a ton to change here,” said Gershkovitch. “We’re kosher, so there’s no seafood, no cheeses.”

The challenge is preparing chef-worthy dishes without using lower-quality ingredients as substitutions, such as margarine for butter or non-dairy creamer for cream, in order to keep it kosher. Kosher regulations require that milk not be part of a meat meal.

“It’s all about what you have in here,” said Gershkovitch, touring Angelica’s walk-in refrigerator and looking over the “mise en place” — finely chopped and measured ingredients in a line of containers on the stainless steel counters.

Those ingredients are being assembled into a new veal sweetbread salad on the Angelica menu with pomelo, shredded raw papaya, fresh chili, orange segments, mint, coriander, roasted cashews, Thai basil and curry leaves on a bed of ginger and carrot sauce. It’s a first course that touches on a Jerusalem tradition, as veal sweetbreads are often part of the classic Jerusalem mixed grill.

They also regularly cook sous vide — a slow method that produces a more tender result, said Sharvit, using a set of tongs to pluck a vacuum-sealed bag of veal out of a steaming water bath.

Still, it can be a challenge to pull off gourmet cooking in Jerusalem, said Gershkovitch. It’s often difficult to obtain ingredients he wants. Dainty carrots with the fronds still attached? Impossible. Purple potatoes and yellow beets? Also rare.

“And they’re not available at the shuk, either,” he said, referring to the Mahane Yehuda market. “You can easily find it in Tel Aviv, but not here, not in Jerusalem.”

After a failed venture as a “naive kid” opening City Hall, a cafe in Jerusalem’s Safra Square that he thought was perfectly situated to catch the expected wave of visitors in the year 2000, he headed off to a local culinary school — pushed by his then-girlfriend’s mother, who filled out his application for him.

“She knew I probably wouldn’t do it myself,” he said.

Even then, he was barely showing up each morning after working until the wee hours as a short-order cook. On the verge of being kicked out, he asked for another chance. The second time, it seemed, was the charm.

After graduating, Gershkovitch went to work at Raphael in Tel Aviv, then moved to Canela in Jerusalem when it was chosen as one of two best kosher restaurants in Israel. A Canela customer convinced him to open a restaurant at the Montefiore, a small downtown boutique hotel, where the owner had seen an opportunity in some unused space off the lobby.

That was the start of Angelica. And even though he doesn’t keep kosher, it was clear that Angelica would.

“I didn’t want to work on weekends,” he said. “I wanted to be with my family, like a normal person, playing soccer.”

The upscale kosher bistro, celebrating its tenth year, has been in the same location for the last five — the ground floor of an office building off King David Street. It’s a quiet, modern space where simple, white dinnerware is set on bare, black tables, heavy silverware rests on crisp white napkins, and potted cacti adorn the tables and windowsills. 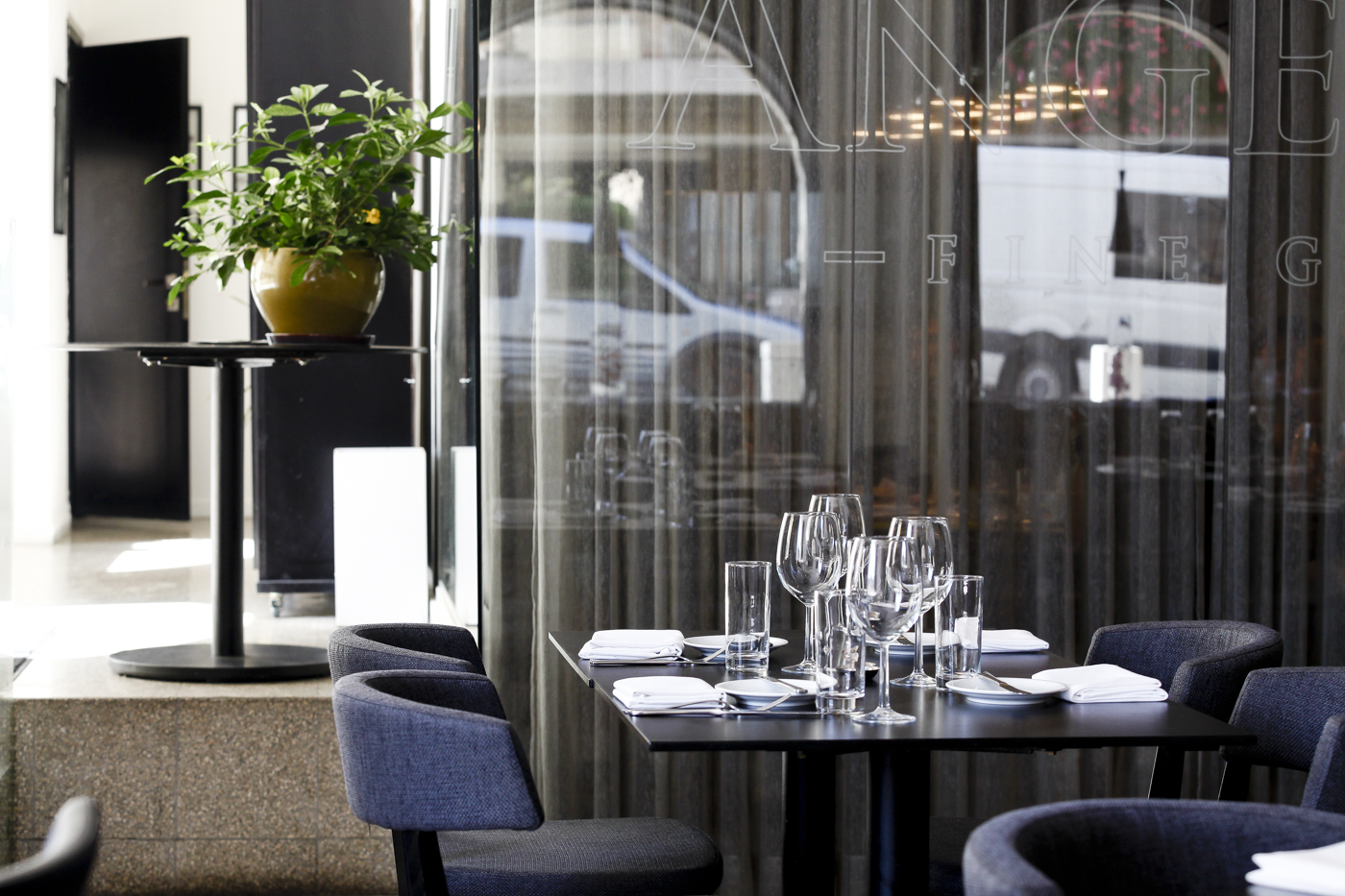 The spare but elegant tables at Angelica (Courtesy)

“It’s a very provincial scene here,” he said. “That’s not bad, necessarily. We spend a lot more on the product than the place. In Tel Aviv, you’ll have a model moonlighting as the greeter; that would never happen in Jerusalem. Customers would think, ‘Why is there a model at the door?’”

Gershkovitch pointed to a poem he wrote in Hebrew, lettered on a nearby wall:

Service
A knife cuts through a hungry atmosphere,
Olive oil drowns white fish,
A scorching cry feels like a whisper,
In praise of all the loners,
The community is important.

“I want people to feel comfortable when they come here,” he said. “We provide what the customer wants.”

And if it’s not on the menu, they’ll make it anyway. “We don’t say no,” he said — neither to the customers who come once or twice a year for a special occasion, nor to the regulars who enter the restaurant through the kitchen just to say hi to the staff. 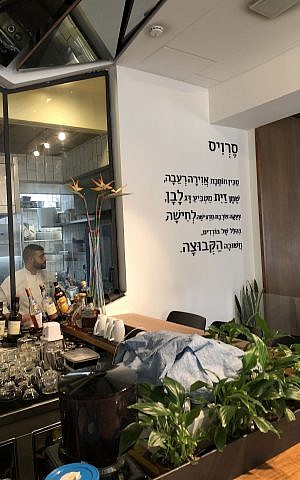 This is what it looks like to run a fine restaurant in Jerusalem that caters to a deep-pocketed tourist population but also has to rely on locals, who don’t drop NIS 250 (around $72) for dinner on a weekly basis.

Gershkovitch doesn’t come from a culinary or kosher family. He immigrated to Israel with his parents and three siblings from Paraguay when he was young, first living in an absorption center in the northern Jerusalem neighborhood of Neve Yaakov.

He now splits his time at Angelica between the kitchen and the dining room, which can add up to 200 hours a month.

He said he has changed as a boss in recent years. “I used to make a balagan, and yell,” he said, using an Israeli slang word for “mess.” “But the client suffers. It’s childish. So I learned to suck it up.”

He’s also a board member for Hapoel Katamon, a fan-owned soccer team that aims to change sports culture in Jerusalem.

“It’s ultimately about teamwork for me. I love teams,” he said. “It’s what draws me to the kitchen, and to the front of this place. It’s this sense of community that you can foster almost anywhere.”